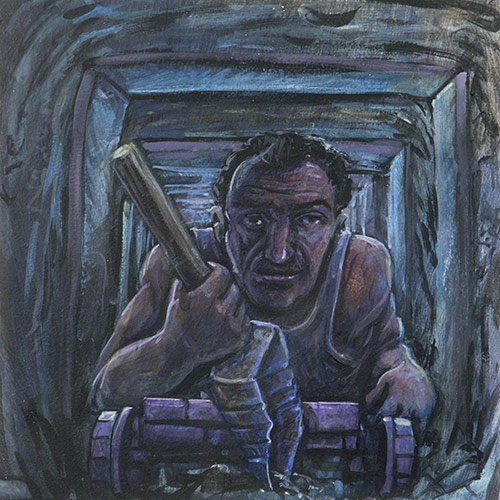 It was the duty of every Allied prisoner of war to attempt to escape from their captors.

It was the duty of every Allied prisoner of war to attempt to escape from their captors.

Thousands of Canadian soldiers, airmen, navy and merchant seamen spent time during the Second World War as captured prisoners, some for only a few weeks, many for almost the entire war.

Almost 1,900 Canadians alone were captured during the Dieppe raid, including Lieutenant Colonel Cecil Merritt of the South Saskatchewan Regiment and Padre John Foote of the Royal Hamilton Light Infantry, both of whom were awarded the Victoria Cross for their gallantry during the failed raid.

These prisoners would spend almost a year and a half in shackles at the German prisoner of war camp at Eichstatt in Bavaria. Escape under these conditions would be difficult if not impossible.

In the final hours during the fall of Hong Kong, Japanese soldiers were brutal, bayoneting wounded soldiers, raping nurses and killing, or maiming prisoners at random. Canadian prisoners taken at Hong Kong were starved, cruelly mistreated and often tortured. Of almost 1,700 Canadians captured at Hong Kong, 128 died of conditions imposed by the Japanese on the island. Four were shot immediately when recaptured after escaping.

Later, 1,184 Canadians were taken to Japan and forced to work as miners. Conditions were so bad in the Japanese camps that another 136 men died. .

Regardless of the difficulties associated with escape, every prisoner understood that he had a responsibility to his country and to the war effort to attempt escape whenever possible.

For many, it was impossible; for others, escape planning became almost their sole preoccupation. Of all the extraordinary stories, none is more compelling than The Great Escape, an audacious plan by Allied airmen behind the wire of Stalag Luft III. Complex tunnel structures -Tom, Dick and Harry- were dug through sand and shored up with bed planks.

The tunnels started beneath three huts, and each was lit with electricity and fed with pumped air. They dropped 30 feet before heading for the woods more than 300 feet away. In the end, 76 POWs escaped through Harry in March 1944, equipped with false ID papers and civilian clothes. Almost all were caught and Hitler ordered the Gestapo to execute 50 of them.

Every prisoner of war camp had its own escape committee to make plans, prepare false documents, secure or fabricate clothing, gather food, or obtain cigarettes or money with which to bribe guards or civilians for assistance.

One such camp was Stalag Luft III, a prison for Commonwealth and American air force officers located half way between Breslau and Berlin. The prisoners established their committee and adopted a plan of escape that was made famous in the book and subsequent movie; "The Great Escape."

The plan called for a tunnel through which 200 men could escape in one night. On 24 March 1944, 76 prisoners managed to escape through the tunnel before a guard spotted the mouth of the tunnel’s exit and the alarm was raised. Only three men made their escape back to an allied country.

Hitler ordered the Gestapo to shoot fifty of the escaped prisoners. Six of those shot were Canadians; James Wernham, Gordon Kidder, Henry Birkland, George McGill, Patrick Langford and George Wiley. The remaining twenty three prisoners were returned to the camp and the dreadful ache of capture resumed.

There are many stories of the bravery of prisoners who, despite severe punishment if caught, were able to take photographs, or maintain diaries describing camp life. One enterprising Canadian was Flight Sergeant Kenneth Hyde of Calgary, who documented prison camp life with photos of escape tunnels, German guards and manacled POWs. He was the camp photographer for the escape committee, but had to wait almost a year before he would obtain a smuggled camera.

Another record of POW life is a diary written by Flight Lieutenant Robert Buckham of Montreal. F/L Buckham’s diary is so detailed it lists times, dates and specific daily events, including sketches showing prisoners on forced marches when German guards were forced to move prisoners in early 1945 when the Russian Army was closing in on the prison camps east of Berlin.

One last noteworthy entry in F/L Buckham’s diary; "On 2 May, the British came. From a parapet around our barracks prison we watched aircraft attacking, heard gun fire... In late afternoon, a tank stopped outside the prison gate. The turret opened and a soldier waved... Thousands of men cheered in a state of hysterical, bewildered blessed release. We were free."

While the tunnellers at Stalag Luft III were busy digging underground, many other prisoners were busy trying to find a way through the front gate or the fences.

Their attempts were often creative, daring and swift. The first attempt to escape the camp occurred on the same day the camp opened on March 21, 1942. Three German-speaking POWs hastily disguised themselves as camp guards and attempted to leave by way of the front gate. They were caught and sent to solitary confinement for a short stay.

While that attempt failed, a lice outbreak in the camp opened the way for a group of 27 POWs, two of whom dressed as guards, to walk through the front gate. The two fake guards—Polish POWs who could speak German—told the guards at the gate that they were taking the POWs to a nearby shower building. Once out of sight, the POWs disappeared into the forest. They were all recaptured; however, it was the first major successful escape at Stalag Luft III.

One man tried to hang onto a truck’s undercarriage, but the prisoner was quickly spotted when the guards searched the vehicle before it left the camp. Another prisoner even attempted to escape through the front gate while disguised as a dog, a German Shepard, to be specific. Meanwhile, two other POWs disguised themselves as Russian workers and tried to join a work crew as it headed off into the forest. They, too, were caught.

While some prisoners saw disguises as the way out, other prisoners began testing the camp’s fences for blind spots or weak points. Two POWs escaped after they cut through the wire while other prisoners distracted the guards. But like the other escapees, the guards caught those men, as well.

Of all the men who tried to escape from Stalag Luft III, only six managed to reach England.

Tom, Dick, and Harry are only three of hundreds of escape tunnels dug during the Second World War at prisoner-of-war camps.

The Luftwaffe built Stalag Luft III believing the loose sand would discourage digging; instead, the POWs immediately began digging. In April 1942, three men escaped from the camp using what was known as a "mole dig" ; where the men pushed the sand behind them as they dug, just like a mole. After starting a 20-ft.-long tunnel a few feet underground, the three men climbed in, and on their stomachs continued to dig filling in the tunnel behind them. The three prisoners escaped successfully; however, they were eventually caught.

Mole digs stopped once the guards installed underground microphones. Undeterred, the POWs began digging deeper tunnels with the first significant tunnel underway by the summer of 1942. It was discovered and destroyed.

Even so, the POWs continued to dig escape tunnels, and by March 1943, they had dug at least 60 tunnels, all of which were either abandoned or discovered by the guards.

However, three prisoners finally escaped via a tunnel in October 1943. That spring two prisoners had the ingenious idea to conceal a digger inside a gymnastics vaulting horse. As POWs vaulted over the horse, the hidden man first installed a trap door and then began digging a three-foot-deep vertical shaft followed by a 100-ft.-long tunnel. After 114 days of digging, three prisoners not only escaped the camp but managed to reach England: It was the elusive "home run".

By the time the North Compound—the home of Tom, Dick, and Harry—opened in March 1943, the tunnellers had gained considerable experience. They knew how to dig in the sandy soil, how to dispose of it and how to hide the entrances. They also knew how to shore up the tunnels to keep them from caving in on the men as they dug. They lined the 2-ft.-by-2-ft. tunnels with thousands of bed boards and Red Cross crates.

The prisoners also stole electrical wire to install lights in the tunnels, and they built airshafts from milk tins and bellows from canvas kit bags and hockey sticks that allowed them to push air deep into the tunnels.

The tunnels, which in Harry’s case, stretched 110 yards (100 meters), began 30 feet underground at a station that provided space for the air pump, supplies and sand from the day’s dig. In all, the prisoners excavated several hundred tons of sand from Tom, Dick, and Harry with about 100 tons from Harry alone. The tunnellers also built a simple trolley system that ran on wooden rails along the floor of the tunnels to transport both men and sand.

Guards discovered Tom in September 1943, while a portion of Dick, which remained undetected, was used for storage.

Even after the Gestapo murdered 50 of the 76 prisoners who used Harry to escape the camp, digging continued in North Compound, despite the very real risk of reprisals. The escape committee responsible for vetting the escape schemes dug one last tunnel that they code-named George. This last tunnel, which was a carefully guarded secret, was meant only as an emergency escape route.

After the murder of 50 of the 76 men who used Harry to escape Stalag Luft III during the Great Escape, the escape committee, the group that organized the escapes, decided to dig one last tunnel.

In September 1944 they began digging a tunnel code-named “George” that could be used as a secret warehouse to store stolen weapons and supplies. It was also intended to give prisoners a hiding place and an escape route. But George was never used.

In late January 1945, as the Russians advanced towards the camp, the Luftwaffe, which was responsible for the camp, forced most of the 10,000 POWs of Stalag Luft III to march to Germany. Only the sick POWs remained behind.

In 2011, a group of British archaeologists, engineers, historians and Royal Air Force combat pilots, both current and Second World War veterans, travelled to Zagan, Poland, to excavate Harry and George. The veterans were all former Stalag Luft III POWs who had worked on the tunnels, including George.

The team had to abandon their work on Harry as their access tunnel kept collapsing under the weight of the loose, sandy soil. However, the archaeologists successfully excavated George, beginning at the entrance, located beneath what had been the theatre’s stage. The tunnel itself travelled beyond the perimeter fence, ending in a vertical shaft that stopped a few feet from the surface.

Within George, the team found trolley wheels made from milk tins, a camp stove, and bed boards used to shore up the walls and roof of the tunnel. They also discovered an air pump made from kitbags, hockey sticks and tin cans, and a radio manufactured from stolen wiring and a biscuit tin.

The names of the fifty Air Force Officers who were killed by the Gestapo after the Great Escape: